We’re about to set off for Glasgow, for the second in our ‘breakfast bunker briefings’ on how to avoid a social media crisis – hosted by us, social media agency Yomego, and moderation and community management company, eModeration.

The first session – which we held last month in the Cabinet War rooms – prompted some interesting discussions. What constitutes a crisis differs enormously according to what market you operate in. I spent many years working in the travel industry, where a full blown crisis is something life threatening – a plane crash, piracy, a sinking ship. But more frequently, we were dealing with less serious, but still important issues – things like engine problems, bad weather at sea, virus outbreaks on a ship, hotel rooms that hadn’t been cleaned properly. When I started working in this business, social media wasn’t a consideration; news would break on radio or TV; and if you got your compensation offer on the table before customers left the plane / ship / ferry / hotel, they’d be neutralised by the time they got to speak to the media.

Today, of course, many of the most serious issues are the same, but the way they break has changed beyond all recognition. A disgruntled ferry passenger today will take a video on their phone , upload it to Twitter, Facebook, YouTube and mysun.co.uk, and wait for the brand to respond. In the most serious incidents – such as the Hudson river crash – channels like Twitter let consumer watch a crisis unfold live, before the brand has a chance to do anything at all.

Many brands’ biggest fear is responding over social media, and getting it wrong. Nestle is a great example of a brand that got it wrong with its handling of the Greenpeace Kit Kat campaign – and shows that being a big brand doesn’t mean you’re immune to error.

But although the channels have changed how brands can respond to a crisis, the basic rules of issue prevention are the same. A good crisis manager will start work well before an issue breaks. During a crisis, you’ll draw on whatever good or bad will you have ‘banked’ with customers and media. Make sure it’s goodwill. Nestle didn’t have a whole heap of that, and it made it harder to handle the crisis. (I should say here that the Greenpeace campaign doesn’t appear to have dented Kit Kat sales, so it’s possible that Nestle couldn’t care less.) Reputation management isn’t something you can suddenly do when you’re up against a major issue.

Social media means you can’t suppress an issue any more, nor can you control how it breaks. But you can ensure your brand’s reputation is in the best shape possible, so you are better equipped to weather the storm. 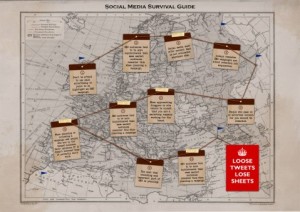 Portrait of a social media crisis