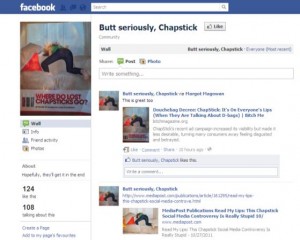 Oh dear. I’ll bet that in the scale of things, innocuous (though popular) consumer brand Chapstick didn’t expect to find itself in the centre of a social media firestorm this week.

I mean, it’s Chapstick, right? A useful, trustworthy, dependable, brand. What could it possibly do to upset people?

Well, it could put a picture of a woman bending over a sofa with the caption “where do lost Chapsticks go?”, for a start. (Despite the helpful suggestions by one or two people on Facebook, I believe the lost Chapstick is buried deep in the sofa cushions. This, of course, is why the woman’s spray-jean-clad bottom is so prominent in the picture.) Underneath is the line: “Be heard at Facebook.com/Chapstick”.

A post on Margot Magowan’s blog, ReelGirl, urged people who found the ad offensive to take Chapstick up on its offer of being heard on Facebook. But it turned out that Chapstick was pretty selective about who it wanted to hear, reportedly removing all negative comments about the image instead of responding to them – or listening to them and pulling the ad.

So ReelGirl started her own Facebook page for disgruntled Chapstick followers to be heard, ‘Butt seriously Chapstick’, including pictures of the offending ad, and the story started gaining momentum.

Of course, companies get it wrong sometimes, and often it is by making mistakes that we learn how to do better. Chapstick pulled the ad, and told fans on its Facebook page. The post starts well enough:

“We see that not everyone likes our new ad, and please know that we certainly didn’t mean to offend anyone! Our fans and their voices are at the heart of our new advertising campaign, but we know we don’t always get it right. We’ve removed the image and will share a newer ad with our fans soon!”

Sadly, the next paragraph doesn’t do it any favours:

“We apologize that fans have felt like their posts are being deleted and while we never intend to pull anyone’s comments off our wall, we do comply with Facebook guidelines and remove posts that use foul language, have repetitive messaging, those that are considered spam-like (multiple posts from a person within a short period of time) and are menacing to fans and employees.”

Fans (in the Facebook sense of the word) who’ve had their comments deleted will certainly feel like they’ve had their comments deleted because, well, they have. Unfortunate that one of those people was  ReelGirl herself, who also happens to write for the San Francisco Chronicle, among other publications. The story has also run in The Wall Street Journal and AdWeek, among others.

Lessons from this:
1.    If you invite people to ‘be heard’, you have to let them be heard. Deleting comments that are abusive or full or bad language is fine; deleting comments that are critical will just lead to bigger problems.
2.    Listen to feedback and act on it, quickly. If a significant number of people are offending by what you do, don’t do it any more. If you’re going to end up pulling the ad anyway, do it before you’ve hit the national press for the wrong reasons.
3.    Understand who and what you’re dealing with. Of course you should listen to the views of all your consumers, but deleting posts from a respected journalist and blogger is likely to make the situation worse, not better.
4.    Be upfront and apologise if you get it wrong – everyone does sometimes. Don’t deny you did it in the first place. Take the action necessary, tell people what you’ve done and that you’ve listened.

(This post first appeared on www.bunkerbriefing.com, our blog about managing online communities through a crisis.) 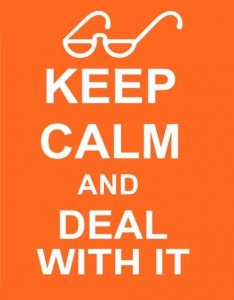 Brands in social media: don’t create a crisis by ignoring trouble
A Facebook Sharing Review of 2011