The Tory Communications Meltdown – what can we learn from it?

Finally, after five days of backstage wrangling, Britain has a new Government. Rather than the Conservative victory that was predicted before the leadership debates, Britain has what is being described as a “progressive coalition” of Conservatives and Liberals and Gordon Brown has had to start looking for a new job.

Tory commentators and supporters have blamed the poor result on a weak campaign. Director of strategy, Steve Hilton, is being blamed for the poster campaign which was famously mocked all over the internet (and which he created on his laptop over Christmas), as well as the central “big society” message, that hadn’t even been tested. Meanwhile, Andy Colson, director of communications is being held responsible for pushing for Cameron to take part in the leadership debates which mainly served to raise the profile of the Lib Dems.

Okay, so the campaign could have been better, but they still achieved the most votes right? So it couldn’t have been that bad.

What we can learn

It’s clearly important to be in possession of a clear strategy. What are the values and ambitions of your organisation? What do you want your target audience to think about you when they hear or read your name? Are your messages consistent through each and every method of communication that you use?
Use expert knowledge. You may know your business inside out, but employing an external communications or advertising agency can be hugely beneficial to your campaign. The agency can bring some much-needed perspective to campaign planning and will have the time, expertise and experience to create and manage a successful campaign on your behalf.
Know where to find your audience and what they want. In the case of political parties, there are some voters that a party just won’t convert to their way of thinking, and by trying to woo them, they may alienate their core voters. This could be a major issue for the ConDem coalition as they try to seek agreement between the extreme left and right wings of their parties on divisive issues. For businesses aiming to shape their image and increase sales, getting articles and advertising placed in media which is read by the right people is vital. As is carrying out extensive research into their target audience. (For example, half of UK adults now buy online. Does your business spend half of its advertising and communications budget online?)
Know your competitors. Most businesses have carried out the SWOT test, but what are your number one competitors strengths? Are their strengths your weaknesses? Before the leadership debates, the Liberal Democrats were not considered a serious threat to a Conservative majority. In the end, most commentators agree that Nick Clegg won the first debate (the one that spawned the phrase “I agree with Nick”) this propelled them into the national consciousness and forced the two main parties to re-think their strategies. The election stopped being a two-party race and political commentators began to talk about the possibility of a hung parliament.
Communication can’t just be about telling people what you think they want to hear. The business has to be true to the values that the company is built on. All external and internal communications have to share the same messages, and business owners must be willing to admit that competitors may have the advantage in some areas. As we have seen with the recent election campaign, not doing these things may be catastrophic for business, but they will prevent the company from achieving its aspirations.
ConDem, strategy

Blogging: quantity, quality and if it’s really worth your time 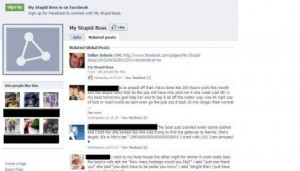 I have a…. vision statement