Anatomy of a crisis: KFC

Kentucky Fried Chicken is no stranger to reputation crises.

Search for KFC on Google and the first page brings back some worrying recent results. First there’s the story of KFC challenging the order to pay compensation to an Australian girl that had suffered brain damage caused by salmonella poisoning (the article claims that sometimes staff members used Chicken that had been dropped on the floor). Then there’s the ill-judged tweet from KFC Thailand encouraging people to pick up some food as they evacuated due to a tsunami warning. Thirdly, we get a campaign against animal cruelty from PETA, and finally we have the latest brand attack – Greenpeace accusing KFC of contributing to deforestation.

Greenpeace released the report ‘How KFC is junking the jungle by driving rainforest destruction in Indonesia’ on 23rd May. The report claimed that Yum! owned KFC was using controversial paper provider Asia Pulp & Paper and called on the brand to immediately stop using products produced via destructive deforestation practices. The report claims that: “A number of the KFC products in the UK and Indonesia have been traced through chain of custody research back to APP.”

But Greenpeace is renowned for its innovative and bold campaigning, so it didn’t stop at the report.  It has created a KFC branded microsite in which the food containers mock Colonel Sanders and his secret recipe.

The animation is followed by a call to revolt against the brand and links to campaign social presences.

Over on Greenpeace’s Facebook page, the charity has posted updates to its timeline showing other ways that it’s making its voice heard. Such as pinning a banner on the front of their head office and posting pictures of protestors stationed outside KFC stores dressed as Orangutans.

The response from Yum! and KFC  has been patchy at best.

The Yum! website declares that 60% of paper products come from sustainable sources – Yum must be talking about all of their brands, because KFC is saying 80%. Both figures have been floating around, and Greenpeace – ever on the ball – has highlighted this. It has also created a hashtag #KFCnogood.

At the time of writing, The KFC newsroom hadn’t been updated since March. 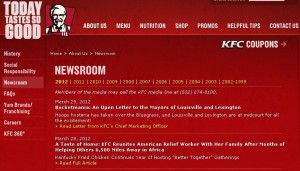 And on Twitter, KFC seems to have gone into copy and paste mode.

It has denied working with APP:

Yum has issued a statement to the media, which is basically the same information that is on the brand’s website – that 80% of paper products come from sustainable sources and that it’s aiming for 100%.

The best response on social channels to date is from KFC UK, which posted a very clear, un-corporate denial and included a link to a PDF file with detailed information on the brand’s packaging policy.

Lessons from this so far:

•    Agree your communications strategy and formulate a rapid response.
•    The attack may be targeting specific countries, but that doesn’t mean it won’t damage the brands reputation globally. The brand is being attacked, not the business area.
•    On Twitter, don’t copy and paste responses to followers. It’s insulting that you don’t take the time to reply to them as an individual, just regurgitate the company line.
•    Think about the impact of Google on your reputation. These days you need a solid search strategy to sit alongside your crisis communications plan, to ensure your side of the story gets heard.