Our round-up of the social media stories that caught our attention in May looks at branded videos, trending news on Facebook and Twitter giving us more room for cat GIFs.

Okay, that may not sound like a particularly ground-breaking development, but it will allow brands, agencies, and well, all of us, to add more content to our posts.

The fight against hate speech

Facebook, Twitter, YouTube and Microsoft have signed up to new EU regulations regarding the moderation of online hate speech. Although this is more of a code of conduct than an actual law, it’s a clear sign that these brands have realised the impact that destructive online discourse can have on individual, especially the young and vulnerable.

While it’s true that all of these brands simply act as platforms for people to share their views, they have both the power and the responsibility to ensure that their community of users aren’t subjected to hateful behaviour while using their applications and sites.

I have to admit, when I first heard that Amazon was getting into online video I did think it was a tad nutty. I mean, when I think of online videos, I think of YouTube, and the countless hours of my life that I waste there. Why would any company want to try and mess with that?

But it looks like Amazon’s new proposition will be targeting major brands (and who knows, maybe YouTube superstars as well), not individuals that are happily creating content for their handful of subscribers. As Mark Boyd points out on The Drum, Amazon has a wealth of data about its users, and any brand hosting video content on the new platform will probably be able to take advantage of it.

“Several former Facebook “news curators,” as they were known internally, also told Gizmodo that they were instructed to artificially “inject” selected stories into the trending news module, even if they weren’t popular enough to warrant inclusion—or in some cases weren’t trending at all.”
Gizmodo, 9th May 2016

Facebook regularly causes a bit of a stir online, and May was no exception. The Guardian got hold of some documents confirming that the trending news section was compiled not just by an algorithm, but by a small editorial team – thus opening Facebook up to accusations of political bias.

I have to admit, I did think “come on, who relies on Facebook for news?”, well according to YouGov research, 44% of 18-24 year-olds across 26 countries. So while the trending news stories on Facebook don’t seem like an issue that warrants much concern, it is a source of valuable information for a lot of people and could be a cause of concern for many. Mark Zuckerberg’s response can be read below. 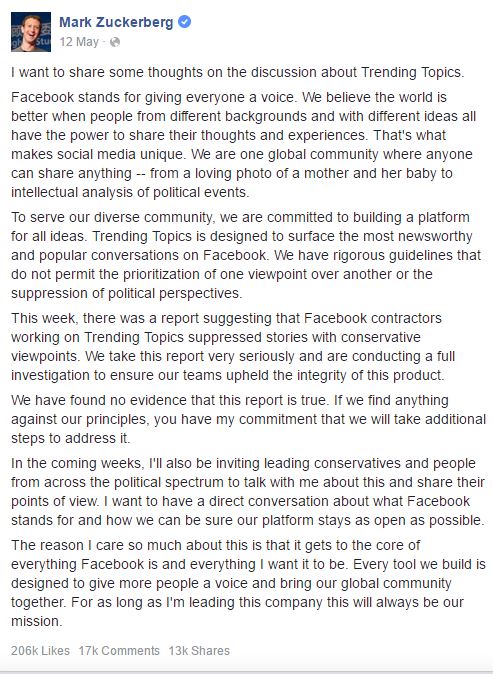 Gemma Storeyhttps://carrotcomms.co.uk/
Gemma is Carrot's Content Specialist. She's a regular blogger for PR Examples.
Why we need diversity in communications
Not everything’s a lesson in good or bad PR