The food and drinks industry has a particularly tough job. A mistake made in food preparation or manufacturing can threaten public health. Twenty years ago, if a customer found a foreign object in their loaf of bread they’d complain to the store (and possibly tell the local paper). These days you can bet that the picture will get posted on Reddit or Facebook and become a viral sensation in less than a day.

This is understandably scary for brands. There’s no control. The next attack can come from anywhere, at any time.

Purveyor of finger lickin’ fast food, KFC, has had its fair share of high profile customer complaints over recent years (such as the 2012 photo of a raw chicken burger posted by a Canadian customer on Reddit). So far in 2013:

In the January case, KFC responded to press enquiries by agreeing that it looked like offal, but saying that while it was unsightly, there was no health risk. It provided a similar response in March, this time adding that it sold an impressive 200 million pieces of chicken a year.

The problem is, when these mistakes keep happening, and continue to be widely shared on social media, the brand appears to be learning little from them.

The last thing a brand in the business of selling food wants is customers to be revolted by their products. Findus understood this principle when it faced its own reputational crisis back in February. When some of its beef products were found to be up to 100% horse, it released a statement which showed that it understood why this was an important issue.

The horsemeat may not have been dangerous, but if people buy beef lasagne they kind of expect it to be made of cow.

Finally, we have Jersey Joe’s Pizzeria (do not click this link if you’re eating – or in fact, ever intend to eat again). The proprietor of this particular pizzeria landed in hot water when a 4Chan user posted links to webcams allegedly into the pizzeria kitchen. The images captured there were…not pleasant.

The owner has been confronted by customers (with his reaction live streamed), and the establishment has been mocked on Yelp. The owner says that it’s not his kitchen in the video, and that he’s the subject of a vendetta.

Unfortunately, a picture is sometimes all it takes to put people off their food.

Back in March, I blogged about the communications #fail that Iceland experienced when its charismatic, but possibly too ‘say what you think’, CEO Malcolm Walker gave his TV interviews on horsemeat. Looking back, maybe this was the plan all along. Divert attention away from the horsemeat scandal by giving people something else to talk about – your straight talking CEO.

A recent Starbucks example shows just how important clear communication is on any channel. The Facebook community management team posted an idea they had for customers to ask for – a vanilla bean Frappuccino with a shot of raspberry syrup. On Facebook, they compared it to a cotton candy treat, and used the hashtag #cottoncandy.

Some customers, excited at the ‘new flavour’, started asking for the Cotton Candy Frappuccino in stores, but frustrated barristers had no idea what they were talking about.It may be fun to post creative updates to Facebook, but if all they end up doing is confusing fans and annoying employees, there’s not much value in it.

McDonalds has had at least two communications problems so far this year. In April, adverts for the brand started appearing on Boston mass transit. Ads parodying mental health posters. People started tweeting and blogging about how outraged they were, and McDonalds quickly issued a statement saying that the ad had been created by an agency without sign-off. It apologised and got the ad pulled.

The second issue involved its response to a national news story. After the Cleveland kidnap victims were rescued in May, the man that responded to their cries for help happened to mention that he had been eating some McDonalds when he made the discovery. In response, the brand tweeted: 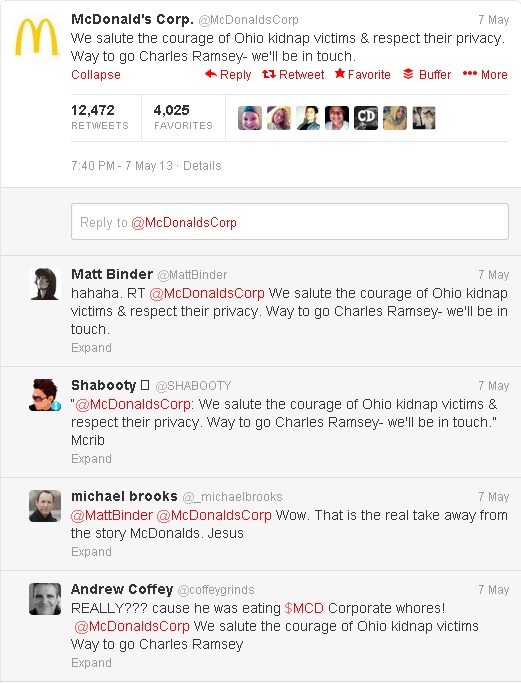 So you could say response was mixed. It can be viewed as a brand trying to do a nice thing, but many saw it as a brand taking the opportunity to get some national coverage.

Other food brands have had issues with managing social media. Burger King had its Twitter account hacked and the hacker added McDonalds branding to it. It took BK three hours after Twitter suspended its account, to release a statement.

US food website, Epicurious, posted insensitive Tweets which promoted its food using during the Boston Bombing.

It took the brand hours to Tweet an apology for the earlier tweets, and then posted nothing at all on Twitter for a few days.

And then there was the notorious Amy’s Baking Company fighting (or starting – depending on who you believe) social media fires, and Mexican food chain, Chipotle, hacking its own Twitter account (really badly – if there’s a good way to hack your own Twitter account that is).

Sometimes, people make mistakes. Brands are no different. Yes, a business will have policies and procedures in place to mitigate the damage, but mistakes will happen.

The key considerations for a brand are:

And most of all, if you apologise, mean it.