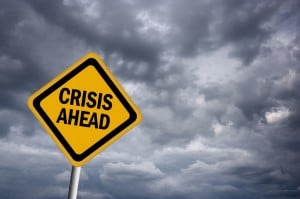 We were in New York at the end of last month, running a series of social media crisis simulations and workshops for brands and agencies.

Last year, Carrot and eModeration teamed up to combine our experience in PR, social media and crisis management to create a social media simulator. We did this because we both believe that experiencing a crisis – or a realistic simulation of one – gives you the best possible preparation for facing the real thing.

Most of us will, at some point, have to deal with an angry mob on Twitter or Facebook. If you’re in the business of reputation management, you’ll understand the damage that a real crisis, playing out on social media, can cause if it’s handled badly.

When we ran a simulation event in New York, we were lucky enough to have representatives from some serious name brands and agencies in the room. For most, their brand is one of their company’s most valuable assets.

Social media has completely changed how an issue breaks. When I started in PR, I worked mostly in the travel industry. In those days, controlling a crisis was relatively straightforward. Usually, we got to hear about the issue before the media did. We could advise our clients to ensure that their passengers and holidaymakers were treated well, and adequately compensated for any trouble they’d been through ahead of them talking to the media, so that when they did, they’d have some positive things to say about the way the crisis had been handled by the company. This was before smartphones, before Twitter and Facebook, and before TripAdvisor. It’s unthinkable now that the brand would be able to control the message to that extent today.

The first reporter to the scene of any major event today is an ordinary citizen with a mobile phone. The first videos to emerge from the devastating tornadoes in Oklahoma, or the Tsunami in Japan, or the miracle air landing on the Hudson River, were all taken on mobile phones. Everyone with a phone camera and a social media account is a reporter in a crisis.

So while brands are used to talking to journalists – those who are commissioned by a medium to report on a story, as opposed to our new citizen journalists – it’s a harder thing to speak directly to people involved, which is what social media means. When you talk direct – rather than through the conduit of a news site, or an ad campaign for example – you’re pretty exposed. You can’t get away with a corporate press statement, the first response to a ‘traditional’ crisis situation.

And this is when a brand can find itself in hot water. If you’re not used to talking direct to your customers, it shows. And it’s fairly obvious when the familiar style of your community managers is supplanted by a corporate voice talking in statements which have been through a long legal approval process, and this statement is blanket-posted on every social channel.

It’s one of the reasons that practicing your response to a crisis situation is so appealing to brands. When you make those mistakes, far better to do it in a safe, simulated environment, than to learn for the first time when a crisis hits for real.

Kate Hartleyhttps://carrotcomms.co.uk/
I run Carrot Communications, a PR and social communications agency that works with fast-growth companies. My interest is in all areas of digital content and communications; and particularly in how to create conversations between brands and their customers, online.
PR for SMEs and start-ups: what to expect from a PR campaign 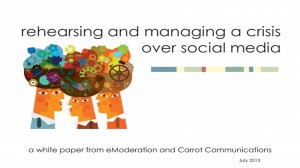