This month, we look at coffee, planes, shopping and…bum parties?!

Starbucks found itself  in hot water this November (along with Amazon and Google), after the companies were invited to be grilled by the Public Accounts Committee about their corporation tax payments (or lack thereof). Now, many arguments have been made about this, some say we should boycott these brands and that they should all be ashamed, while others point to the massive amount of rent (in the case of Starbucks), PAYE and NI that the UK is getting from these businesses and the jobs they create.

While media and political types debated who was right and who was wrong, some tax payers were taking matters into their own hands. People took to the Starbucks UK Facebook page, with one creative person uploading a photo and tagging it with the words “TAX DODGERS”. Fans then debated whether or not the brand was tax dodging, or indeed, whether or not they cared.

Comments were also being posted on the timeline as recently as yesterday:

The Public Accounts Committee published its report today, indicating that the Inland Revenue should do more to crack down on tax avoidance, and Starbucks took the chance to respond by agreeing to review its accounting practices.

A spokesperson said: “We have listened to feedback from customers and employees, and understand that to maintain and further build public trust we need to do more. As part of this, we are looking at our tax approach in the UK.”

There wasn’t much Starbucks could do in this situation. Its argument was that it followed the law, but when customers started to make it clear that they considered the brands actions to be unethical, the only thing the brand could do was let people have their say. Nothing that the brand could have posted in response would have made the situation any better, until it said that it would be reviewing its accounting practices.

British Airways dropped a clanger in pretty major style in November. Just one tiny split second lapse of attention (maybe), and whoever was in charge of the Twitter account had retweeted a highly offensive and racist tweet (don’t click if you’re easily offended by swearing).

BA was quick to delete the tweet, but not that quick, as it was soon retweeted to an even wider audience than the brands 210k followers, and screenshots were taken and shared further, making it impossible for BA to forget about in a hurry.

The incident was picked up by the travel press, and when asked for a comment the BA spokesperson said that they weren’t sure if it was the fault of an auto-retweet tool or of the account was hacked, which honestly reads as a bit of an excuse. In cases like this, the original statement in the above tweet is good enough until the investigation has been completed.

The additional statement raises questions like, if it was an auto-retweet service why are there not more retweets? Does BA auto retweet all mentions of its twitter account? Is that wise? (No.) Wait, they think someone hacked into the account to post one retweet?

You see! My head is now full of questions for BA. Just keep it simple, and don’t make excuses.

A lesson in how to pee off your premium customers

Let’s head stateside now to observe the carnage that was Sears pre-Black Friday sale for its premium Shop Your Way customers. That’s right, customers who pay for the best customer service because they love Sears that much.

These VIP shoppers would get to participate in an exclusive early sale, but the early signs were not good. The special countdown clock on the website used the wrong time zones; people ordered items and then received cancellation emails; credit cards would take days to process; customers that tied to click and collect items instead found that the goods were out of stock at local stores – it was a mess. 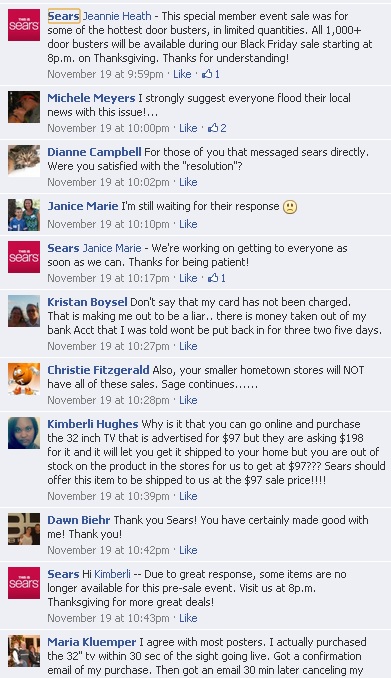 And the Sears timeline quickly filled up with annoyed premium customers complaining that the prices had changed and that they had been charged for items that they did not have. 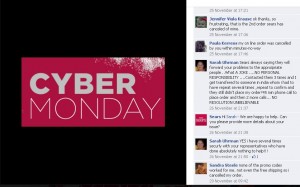 And so people were no complaining on the timeline and in the photo’s section of the Sears profile. The community managers were trying their hands at some direct responses, but some fell short. (If a customer is hopping mad that the price of a TV has suddenly gone up, it might not be the right time to say “Visit us at 8p.m. Thanksgiving for more great deals!”)

Meanwhile, the customer service twitter account maintained an eerie silence. (Although, earlier in the month, it did take the time to retweet a customer’s complaint about a shoddy oven door. No, I’m not sure why either…) 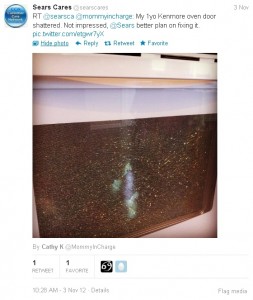 Perhaps it’s too much to ask for the brand to help out each and every person that complains via social media, but some brands appear to manage it (@ASOS_Heretohelp does a fair job). But by replying to the odd one or two people by saying what basically amounts to ‘it’s a sale and things get sold out quickly’, is more likely to do harm than good.

How could we not include this simply divine hashtag EPIC fail that was #susanalbumparty.

Poor Sue. All she wanted to do was hold a party for the release of her new album, and some silly member of her promotional team had to go and create a rude, yet very funny, hashtag.

But was it really a mistake? It certainly generated far more coverage than the actual party would have. It made the Guardian; the Daily Mail; the independent and the Sun. But even if it did prove to be a coverage generator, it appears to be one of those hashtags that look good in the tweeter’s head, and then takes on a hideous life of its own in the wild (even the tweeter’s rapid rewording of the hashtag couldn’t put that genie back in the bottle).

Gemma Storeyhttps://carrotcomms.co.uk/
Gemma is Carrot's Content Specialist. She's a regular blogger for PR Examples.
Why PR needs to get to grips with Google+
Managing a social media crisis