Ah, Apple. How I love your shiny, money-burning gadgets. How I fervently covert all the iPads and the MacBooks that I see flashed around by the cool crowd who are probably even now wondering, did she just make a Hobbit reference in this blog post?

Anyway, über cool tech company Apple recently released its free iOS6 update, one of the main features of which was a, “beautifully designed from the ground up” replacement for Google Maps on peoples’ prized iPhones, iPads and iPod Touchy things. Lovely. If only it worked.

The app replaced the fully functional Google Maps with a map app that gave incorrect routes, old images of major cities, distorted images and basic incorrect information. Like the existence of Apple Stores in the area:

Apple has a desolate, tumbleweed populated Facebook page which has 7.6 million Likes, despite zero attention from Apple. So, people can’t really get a reaction from Apple via Facebook. The reaction to the iO6 maps fiasco therefore found other places to flourish.

Parody Twitter account, @iOs6Maps, which claimed to be tweeting the real reactions of the development team. Reactions such as:

The account was then suspended by Twitter, only to be re-born as @fake_iOs6maps. A Tumblr account was set up, the sarcastically named theamazingio6maps posts images of map fails. Even London Underground staff got involved in the mocking:

That was shortly followed by a parody video explaining what maps was all about, which was reported on Mashable. While this was going on, Apple remained silent.

Finally, on the 28th September, a week after the upgrade was released, Apple CEO Tim Cook released an apology letter on the Apple website, which was picked up by the technology press and received a largely positive response – especially for suggesting that people use rival mapping applications.

For the most part, Apple handled this crisis the way it usually does, with a period of utter silence. (I like to imagine them rendered mute with shock, thinking “What?! How dare these people criticise us? Don’t they know how awesome we are?”) With its eventual response, Apple has shown that it has learnt from the iPhone reception debacle of 2010, when they blamed the user for problems with the phone.

Yes, it’s time for the classic ‘finish this sentence’ fail because inviting random people on Twitter to freeform thoughts about your brand under a specially created hashtag has never backfired. Naturally, it resulted in tweets like:

Which prompted this response from the brand:

Commentators were divided over whether this was: a) intentional and brilliant or b) unintentional and a bit thick. It certainly got them coverage. But, did Waitrose deliberately send the Tweet because it knew it would get the reaction it did, and knew that the marketing press would publish a host of articles about it? If so, I maintain that this is a naïve thing to do. Any good communications professional will tell you that no, not all coverage is good coverage.

Because you’re not worth it

When Starbucks causally announced that it was improving its customer rewards, oh and soy milk will no longer be on the house, fans and followers went nuts. 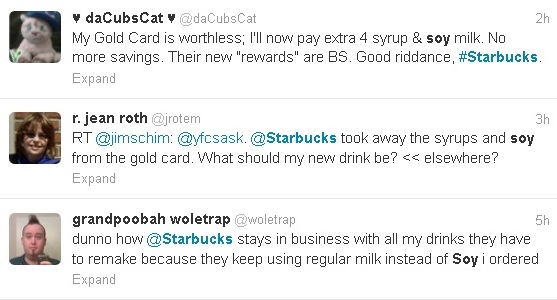 A petition has been set up to keep the free soy milk, and a link to it has been posted on the Starbucks Facebook page.

At the time of writing, it has 284 comments and 167 shares. Despite angering its dairy-free contingent of customers, Starbucks has refused to change the decision, saying it needed to provide rewards that would benefit the greatest number of customers.

Starbucks doesn’t seem to realise that for many of its soy drinking customers, drinking soy milk isn’t a fad diet thing, but an ‘I’d like not to be in crippling pain or die today’ kind of thing. Starbucks should either charge everyone the same for any form of milk, or make it free for all. It handled the announcement as if it were withdrawing a perk, rather than charging a select group of customers more money because they medically could not drink cow’s milk. It then issued a statement that completely missed the point.

Naturally, people flooded the Facebook page with angry responses, the company then deleted the page. The angry customers also headed over to Yelp and posted a series of one-star reviews.

It turned out that the person replying to the poster was the president of the company, who had taken over the page from a fan who had set it up.

Apparently, he was tired and doesn’t really get social media. He said he didn’t read the message properly, clicked on their name, saw a map of Pakistan and assumed that that was where they were posting from. He admitted he “screwed up” and that it was “wrong”. After initially offering to resign, the president has now decided that he’ll get someone more social media savvy to run the page.

This isn’t a brand fail in the true sense, but it clearly shows how easily a brands name can get tied up in a very messy social media gaff. When @Footy_Jokes (which has over 212,000 followers) tweeted a cartoon depicting domestic violence (linking it to a new football game), campaigning Twitter account @EverydaySexism took the account to task. Avert your eyes if you don’t want to see an image of violence.

The (so-called) joke account posted an apology pretty quickly after this and deleted both the original tweet and its apology soon after. There was no reaction from the Twitter account @FIFAcom or @EA; both accounts appear to exist mainly to tweet news rather than interact, so this may have passed by both brands unnoticed.

If that was your brand being linked to such a violent, offensive image on social media, how would you respond? If at all? 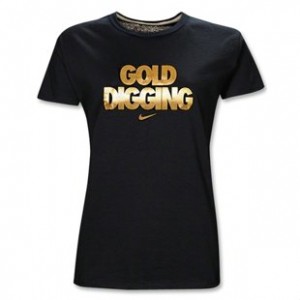