October saw two great examples of what brands should, and should not do when responding to fans on social media. Show some personality or resort to corporate drone mode? Let’s see which tactic has been the most successful.

I can’t be the only one who, at some point, has wanted to chuck a brick at the TV when that melodious sanitary pad advert of joy has appeared on the screen. Its mockingly svelte, tanned, dancing women with their smiling faces and ability to fling themselves out of planes despite being stabbed millions of times in the womb by minuscule invisible smurfs of doom. Grrr!

One man snapped in October and decided to challenge the brand in question thus: 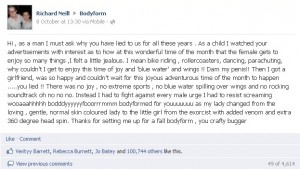 Now, I’m not a cynic (Kate – don’t look at the screen like that, I’m not!) but some may suggest that the man in question could have been a clever marketing stunt by the Bodyform team. (I know, let’s make fun of ourselves on Facebook, then we can re-position our advertising while generating tonnes of coverage…) But, I would venture to suggest that it doesn’t matter if he was real, or fake, this is still a brilliant example of how to handle, or be seen to handle, a conversation with a customer on social media.

For, after reading said message, the Bodyform team ran off and produced this:

•    National media coverage: including the sun; the daily mirror; the telegraph; the daily mail and the guardian

•    Fashion websites covering the brand, such as: grazia and stylist.co.uk

•    Coverage on websites unlikely to cover the brand such as: mashable and  the register

Bodyform then used the conversation to re-position the brand, including the Facebook page: 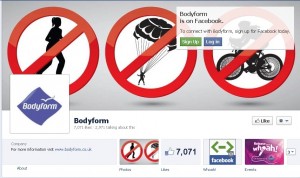 And the way the site appeared in search results:


This is a fantastic example of what a brand can do if it listens and reacts to its customers. Social media has given brands so many more opportunities to connect and co-operate with customers and fans. Bodyform could have ignored the message, or replied with an overly corporate “thank you for your feedback” type affair before retreating into its Batcave to have a thought shower, but it didn’t.

Thomas Cook: The one that came back from the dead

Almost a year ago a man named Thomas Cook asked holiday company Thomas Cook for a free mini-break due to the years of free advertising he was giving them: 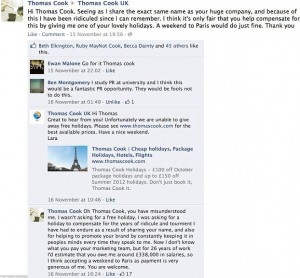 But Thomas was lucky, because rival brand Low Cost Holidays was on the ball and stepped up to the plate, posting the following response:

Cheeky, but very effective. For Mr Cook has just been on his free holiday. He then posted the story on reddit, and it took off on Twitter. The tale then found its way to national press and the travel press. Thomas Cook (the brand) decided to respond to this coverage on Facebook, and took the opportunity to say congratulations, while also telling the world how fantastic it was for helping needy children, including posting a picture just in case people didn’t get it. While the cause is indeed much more worthy, it’s the equivalent of sticking your fingers in your ears and shouting “I can’t hear you! I’m fantastic! Everybody LOVES me, including ME!” In short, it’s a tad obnoxious. 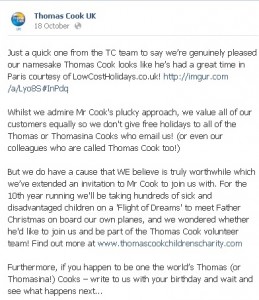 Brands have to tread a fine line when responding to comments made on social media platforms. It’s so easy to say the wrong thing, and the next thing you know the story’s gone viral and the CEO is reading about how stupid the brand is over his morning cornflakes. Yet, if the Bodyform example has shown us one thing, it’s that getting it right is also very easy. It just requires a few things: 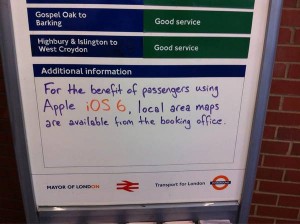 September in social #fail: the good, the bad and the ugly
Why PR needs to get to grips with Google+