Maybe you have a fantastic creative idea for a campaign, something that reflects your brand ethos, something that will really get fans involved. Great! But first, it’s best to check a few things, such as: is there a danger of the campaign offending too many people, and is the brand under attack from special interest groups that could hijack it.

Of the, frankly, many brands that have been fighting social media skirmishes this month, there are three that stand out for me.

Yes, yes it did work for Burger King. Back in 2009 the Whooper Sacrifice campaign asked people to unfriend 10 people to get a free burger, and they duly did, as you would. For what is friendship when there is processed meat involved? In total 82,000 people deleted 230,000 friendships, prompting Facebook to step in and put an end to the unfriending.

So, brands know by now that releasing a Facebook app that involves friends is one of the best ways to ensure the app goes viral. After all, friends are at the heart of Facebook’s ethos, what can go wrong?

Step forward, Square Enix, publisher of Hitman Absolution. The gaming publisher had already been in trouble in August 2012 for releasing a promotional trailer for the same game series featuring women dressed as sexy nuns being killed in a not very nice way.  This time it decided to release a Facebook app/ad campaign instead.

The app encouraged Facebook users to send their friends virtual death threats. Yes, you read that right. Here’s what it looked like: 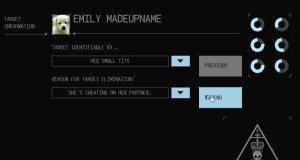 And here is what the ‘friend’ saw (apparently, only they could see it):

You could also choose to kill them for reason such as: “ginger hair”; “big ears”; and their “annoying laugh”. The ‘friend’ then gets to see a video, which used data from their Facebook profile, of a computer game character killing them. Nice.

Although the publisher described the app as having “its tongue firmly in its cheek” in its press release on 4th December, it quickly changed its tune when gaming blogs started to highlight how vulgar the app was, and how it could be seen as bullying. Within hours the publisher pulled the app, and its website, issuing this statement to media: “Earlier today we launched an app based around Hitman: Absolution that allowed you to place virtual hits on your Facebook friends. Those hits would only be viewable by the recipient and could only be sent to people who were confirmed friends. We were wide of the mark with the app and following feedback from the community we decided the best thing to do was remove it completely and quickly. This we’ve now done.  We’re sorry for any offence caused by this.”

If you ignore the “wide of the mark” remark, which seems oddly apt for an assassination app, Square Enix did the right thing here. It apologised to the channel that the complaints were on, and acted quickly to remove the app. It clearly learnt from its experience with the nuns, because it took the company a week to apologise in that case. (Let’s skim over the fact that nobody at the place realised that a trailer showing a man shooting a female sexy nun character may cause some offence,or that it might not be such a good idea to use online bullying to promote a video game.)

Don’t ask people what they think about your brand if…

Brands like Waitrose and McDonalds have experienced what it’s like when a social media campaign, designed to highlight how wonderful their fans think they are, backfires. This month it was the turn of Cheerios.

Instead of a hashtag campaign, Cheerios launched a Facebook app which asked users to write a word or two about “what Cheerios means to me”, and it would appear on a yellow background, in Cheerios trademark font, and be posted to the brands Facebook page. 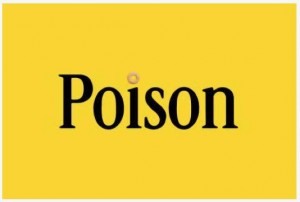 However, the makers of Cheerios, General Mills, recently donated a hefty sum of money to defeat a Californian state Proposition that would have forced brands to label their food products. In short, it would have made brands tell consumers if the product contained genetically modified food. The Proposition was defeated, and some people were not happy.

The Cheerios Facebook app came at just the right time for these people to vent their anger at the brand. The brand’s community managers took down the off-message pictures and posted a statement on Facebook telling people that it was listening to them, but that contributors should remain respectful of community guidelines. It then provided a place under the message for comments, where people began to post more negative comments.

This highlights the importance of marketing departments working with other areas of the business, and shows how reputational issues affecting one brand can impact other brands that it owns. It wasn’t the best time for Cheerios to launch this campaign, but it’s likely that the Facebook community managers would have had to deal with negative comments anyway.

Virgin Mobile US had to back pedal pretty quickly when Twitter users picked up on its digital advent calendar images. First people tweeted complaints about the entry for 2nd December: 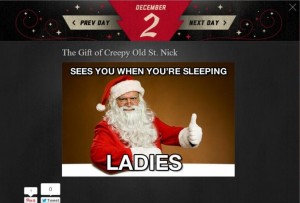 But the one that really set the world on fire was for the 8th December:

Tweets were directed to the @EverydaySexism account, which then tweeted about it (retweeted 161 times), asking followers to @richardbranson and @virgimobileus ,telling them what they thought of the ad. Richard Branson, who no longer owns Virgin Mobile US, tweeted his response (retweeted 143 times), saying that the ad was ill-judged and that he had told Virgin Mobile as much, as it still carried the Virgin name. The image was swiftly removed, with Virgin Mobile US saying: “This image was not approved by Virgin Mobile USA. We apologise deeply to anyone who has been offended by this posting. It was removed early this morning.”

This is an interesting one, as it shows that you might face reputation issues from unexpected corners. If a company carries your name (or a name associated with you), you’ll feel the fall out (just ask AV brand McAfee!).

Lexus answers questions about its “attack” on social media

This is an example of what happens when some people read more into a campaign than its intended message. Luxury car brand Lexus launched a series of TV ads in North America telling people to go out and experience life rather than use Pinterest, Facebook and YouTube to Pin, friend, and view.

At the same time as seeming to dismiss social media, local dealers are publishing Facebook competitions on their Twitter accounts, and the main Lexus Facebook page is running a great fundraising drive for the Boys and Girls Club of America. Some people tweeted their annoyance at the brand attack on social media, and the story was picked up by CNBC, who approached the brand for comment.

When it asked if Lexus really hated social media, a spokesperson said: “The message is basically that connecting with people online is great, but for the holidays people should connect in person (and, of course, drive to their destination to do so.)…We’re not dissing anything, just encouraging people to get out for the holidays.”

Brands need to be aware that issues can flare up out of literally nowhere and garner national media attention. Lexus did a great job at putting across its true intentions with the statement, which was clear and hard to argue against. And to be honest, sometimes people just need to, well, get out more.

And now, here are the best social media stories so far this month. 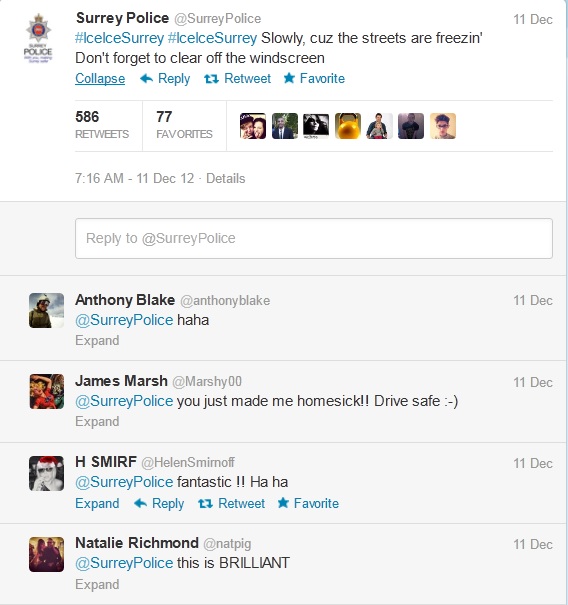 It resulted in hundreds of Retweets, national media coverage, and a place in many people’s affections. It just shows what a great way social media can be to connect and engage with people. Whether you represent the police force, or a brand, showing your human and defying people’s expectations can have a huge impact on perception.

Another fantastic example of the power of social media can be seen in the #BiebsMeetAly campaign. Set up by friends of teenager Aly Wolf, who is battling liver cancer, the friends used Twitter, Facebook, and YouTube to try and arrange a meeting between Aly and her idol Justin Bieber. The hashtag even became a global trend.

The Twitter account and its followers targeted The Ellen Show for a mention, and to help arrange a meeting:

In the end it was a Chicago radio station that arranged for Aly to get backstage passes to meet Justin at the concert that she’ll be attending with friends on Saturday 15th December. It took around a week from the Facebook page being set up, to the meeting being arranged.

Finally, how could we ignore the first ever tweet from His Holiness? A clear sign that social media has infiltrated virtually all areas of society, and that some people don’t need to follow back… 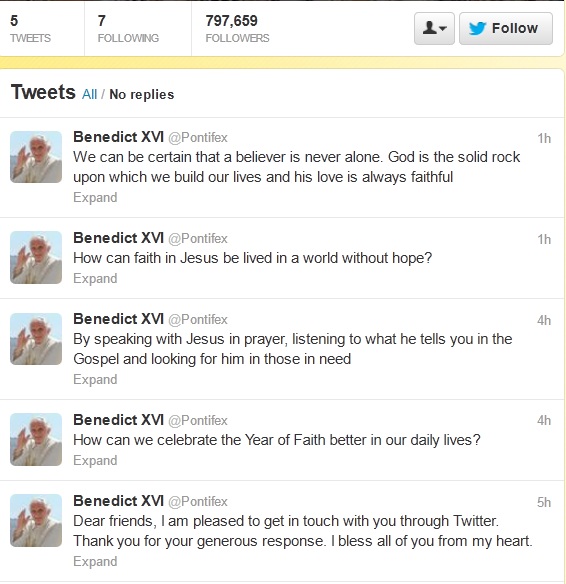 Let’s just hope he has a strong password, and that no one accidentally tweets from the wrong account. That could be nasty!