Social media is a wonderful tool. Brands that understand social media are great at connecting with and engaging fans, and developing strong online communities that the brand can nurture and learn from. Sometimes, however, brands – and people – get it wrong. They misjudge a situation and forget that in the world of social media, no perceived injustice will go unpunished.

That dispute you had with one customer? Who cares? It’s just one person; there are many more people out there that you can sell to, right? Well, with social media that one customer can broadcast their dissatisfaction for all to see and hear. It’s vital that brands take the time to consider how their responses to situations will be received, or they risk walking into a social media storm.

So, what have this month’s prominent social media fails demonstrated?


How does your brand respond to negative online customer reviews?

If you want to repair the relationship with the customer you might try to reply, apologise and offer something to make up for the bad experience. Then again, you may take the view that it’s just one opinion from one person that doesn’t look very influential online, so maybe it’s nothing to worry about.

What you probably wouldn’t do is nab their picture off the review site, post it on your brands Facebook page, accuse them of not tipping and tell the b!tch to go f’herself. Apart from things like, oh I don’t know, manners, customer service and basic human decency, you’d be taking one small critical voice out there in the virtual wilderness, giving it a platform and providing cast iron evidence that it’s not opinion – its fact.

Yet, this is what BonersBBQ chose to do.

Naturally, some random loons “liked” the comment that the brand posted on its Facebook page, but others objected, and soon the story was popping up on blogs all over the place. The brand responded to the negative responses with all of the grace and decorum that we should have come to expect:

The owner then jumped to the brands defence like some over enthusiastic anti-hero – let’s call him #Fail Man – so #Fail Man went on the page highlighting everything that they feel the customer got wrong and emphasising that the Facebook page was their forum and they could say whatever they wanted to on it.

Oddly, most people didn’t appreciate this and the negative replies kept coming. The brand then deleted all of the conversation and posted a not hugely convincing apology, with a sly dig at the end about tipping. Eventually, the brand posted a more fulsome apology and offered a refund.

Which was nice. If only they hadn’t then “Liked” a comment advocating waterboarding for all those who did not tip. (Incidentally, the customer said that she did.)

So, what can we learn from this mess?

–    Don’t go on the offensive – it won’t work and will make you look pathetic. You might be angry but just think – would you say it to your mother? (Even if you have an edgy brand identity, there is no excuse being abusive.)

–    Don’t assume that everyone shares your passion for your brand and should worship at the altar of its awesomeness. They don’t. It’s your job to make them passionate and you won’t do it by going all Rambo on them.

–    Your social media profile is not your exclusive domain. Facebook is about engagement not pumping out messaging. People see what you write there and they judge you for it.

NME – It’s not a good idea to mock the people that your brand depends on. When NME Editor Luke Lewis set up #howshitisedsheeran he didn’t think about the consequences for the reputation of the magazine. He may not care what the singer thinks, but what about the readers, the record label and other musicians? This is an example of why it’s better to go into social media with a clear strategy rather than use the medium just to showcase the personality of the brand.

LA Fitness – When the Guardian consumer column initially failed to get a victory for one of its readers, the journalists took to Twitter to spread the news. It didn’t take long for tweeters to rally behind the #LAFitness campaign. Some offered to pay for the contract themselves, others encouraged people to cancel their own contracts with the company. 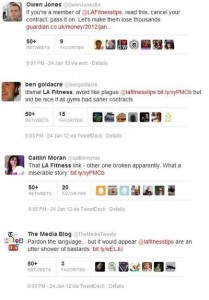 As for LA Fitness, it initially tweeted the stone cold “We do not comment on individual cases.” It didn’t win the brand any fans and the brand eventually capitulated.

These days, your customer service dispute may not start on social media, but that’s where it could end up, and the results may not be pretty. As a business, it’s logical to say that if a customer has signed up to a contract, they should abide by its terms. However, social media is about authenticity and engagement. People expect brands to have a certain level of flexibility and empathy – in this case the brand failed to demonstrate either.

McDonalds – McDonalds decided to kick the New Year off with a hashtag campaign on Twitter using the tags #McDStories, which would inspire people to post their idyllic McDonalds memories (childhood parties? First dates? Wedding Proposals? Your girlfriend dumping you for proposing to her in McDonalds?) and #meetthefarmers which was apparently intended to show the brands commitment to fresh produce.

Alas, the hashtags were hijacked.

Hashtags like #McDStories and #meetthefarmers are essentially meaningless (unlike #howshitisedsheeran) which allows people to attribute their own meaning to it; this opens the doors for anyone who has a problem with the brand to have some fun at the brand’s expense.

VW and H&M – Displaying control freakery is a huge no-no, yet bizarrely some brands continue to act like some kind of virtual Caesar, deciding which comments will be fed to the metaphorical Lions and which are good enough to live. Brands that decide to engage in social media (engage being the operative word here) should accept the fact that people are entitled to express their opinions, even if those opinions are off message for the brand.

Two brands have been accused of deleting critical Facebook comments in January.

VW asked its fans what their New Year’s resolutions were, and asked what they would like it to do for them in 2012. People responded with comments about VW’s environmental policy. 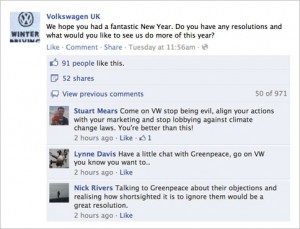 Then, rather than responding to them, VW began to delete the comments – prompting Greenpeace to make this video.

Meanwhile, H&M has been busy deleting comments made on its Facebook wall about an allegedly stolen design.

Deleting responses, or fan wall posts, shouldn’t be done if the only reason for deletion is that the comment makes the brand look bad. If you’ve asked for people’s opinion and it doesn’t tally with that of your brand then tough luck. If you don’t allow freedom of opinion on the brands Facebook page people will simply go elsewhere to express themselves about your brand.

Unfortunately, I’m sure that are other examples of social media gaffs made by brands in January 2012. Mistakes are easy to make, especially with social and especially if you don’t think about the consequences of the message you are sending out. But, in general, people understand that behind the Twitter or Facebook account is a person that has made a mistake. Often, it’s in the brands (or persons) response where the real issue lies.

Brands would so well to take a leaf out of the book of Labour MP Tom Watson. He made the mistake of leaving his Twitter account logged in while he went off for a meeting. 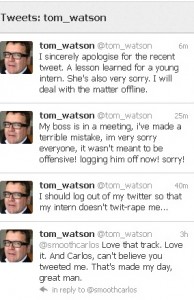 His intern made what seems like an impulsive decision to play a joke on the boss by tweeting from his account. The sound of the collected Murdoch press rubbing their hands in glee could be heard across the land, while the poor intern had to deal with the consequences of the joke gone wrong. Tweeters then launched a #savetheintern campaign, but Tom Watson quickly confirmed that she was never in danger of being fired. She made a mistake, feels terrible about it and apologised very quickly.

A lesson that many of the brands above could learn from. 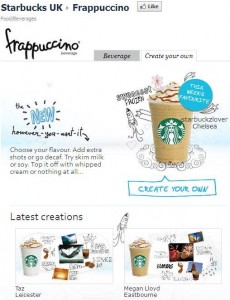 Brands: engage your Facebook fans in five simple ways
How social is your brand? 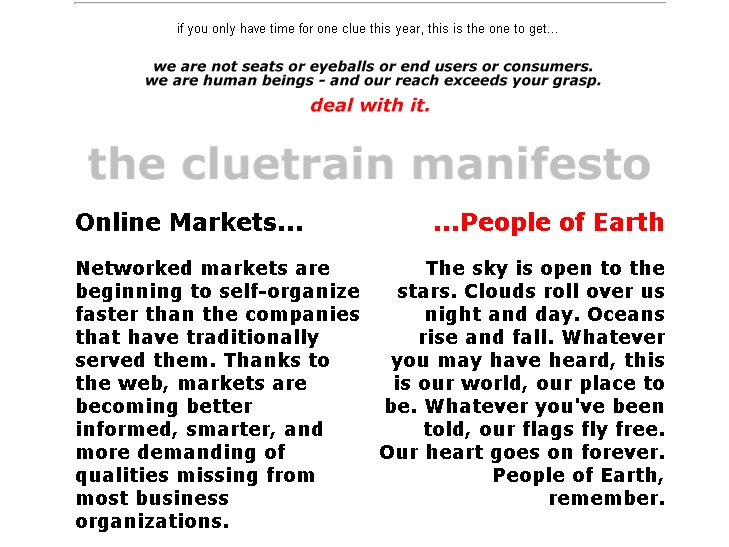 The Tale of the #HMVXFactorFiring