Google has been in the spotlight for the last few days for an appalling mistake made by its facial recognition software. Now, when you upload images to Google Photos, Googles AI tags them with what it deems the most appropriate word.

This caused an issue earlier in the year when it was reported that Google was tagging pictures of dogs as horses, but it’s most recent error finds the software tagging photos of a software developer’s friends as “Gorillas”. 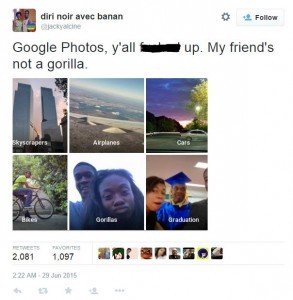 Of course, this should never have happened. Google has, however, responded well by:

Apologising. Not a stiff, legal approved, apology, but a genuine one.

Analysing. How did the problem happen? How can you stop it from happening in the future?

Acting. The problem needs to be fixed as soon as possible, and people need to know that it won’t happen again.

Communicating. Google didn’t just assume that the fix worked. Google found that the problem was part of a larger issue, and that the software needed to be patched. 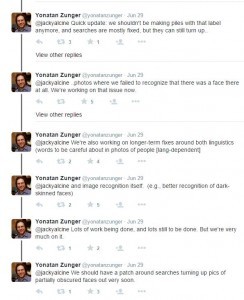 Acknowledging. It’s fine for everyone involved (including people that work for the brand) to be outraged and appalled by what happened. Accept that people will have these feelings.

“We’re appalled and genuinely sorry that this happened. We are taking immediate action to prevent this type of result from appearing. There is still clearly a lot of work to do with automatic image labelling, and we’re looking at how we can prevent these types of mistakes from happening in the future.”

Don’t waste time trying to defend the brand, it’s not really about protecting the brand against angry and hurt people, but about the brand protecting the people from being made to feel in such a way in the future.

Focus. When someone makes a genuine mistake, or an embarrassing flaw is revealed in a lauded piece of tech, it can provoke a lot of reaction. Especially if the brand involved is as well-known as Google, and even more so if the mistake happens in an area that is politically or socially sensitive. The issue is likely to cause a huge amount of controversy, with people debating how this could happen, attributing characteristics to the team behind the software, and getting into slanging matches with each other over their own perceived views. The job of the brand is to focus on the person raising the issue; to apologise, solve the issue as quickly as possible and to ensure it doesn’t happen again. Not to get into the debate.

That’s not to say that there aren’t larger issues that need to be addressed. As the person who raised the issue, Mr Alcine, told the BBC, it raises questions about the sort of images Google has been using during software development. It raises further questions about the diversity of its workforce, and how that impacts product development. These are important issues for the brand to address once the initial issue has been fixed.

It shows how important social listening really is. The issue of mislabelling photos has been raised before, although that case was wholly inoffensive. Brands need to listen for problems that people are having with their products, and think of what could happen in the worst case scenario. They need to fix issues like these before they happen.

John Lewis, a dog and a snowstorm